Imagine if that was a real hat!
Years ago my husband and I loved riding our bikes all over Phnom Penh. That was when the number of vehicles plying the city-streets was lesser compared to now. Anyways, during our bike rides in those days, the well-manicured Hun Sen park provided us a resting spot, and the lavishly decorated fountains gave great views to take postcard-pretty pictures… Now, I am reminded to take Miss Igorota with me the next time we go there. Exhilirating, dizzying, super-fast! You grab on to your seat, and once it started rolling you can’t help but grin — you know, the kind of nervous grin you have when you get on a roller-coaster ride because most tuk-tuk drivers transform into madmen once they hit the road. It’s like being whisked from point A to point B at a very alarming speed.

An auto rickshaw or tuk tuk (auto, rick, autorick or rickshaw in popular parlance) is a motor vehicle that is one of the chief modes of transport across many parts of South and East Asia, especially as a vehicle for hire. It is a motorized version of the traditional rickshaw or velotaxi, a small three-wheeled cart driven by a person, and is related to the cabin cycle.

For those who haven’t been on this side of Asia, Miss Igorota recommends a tuk-tuk ride for first-timers in the city. It is an essential and a fun way to see the city. Tourists and barangs (expats) in Phnom Penh are usually seen riding tuk-tuks, but now, more and more locals are starting to use them to commute. It’s supposed to hold only 4 passengers, but the humble four-wheeled tuktuk can hold as much as a dozen or more. Plus a number of chickens, pigs, sacks of rice… figure that out. Miss Igorota reckons that, apart from having four-wheels and a bigger body size, tuk-tuks are similar to traysikels (tricycle) back in the Philippines.

Ladies (and gentlemen), I am happy to say that Ms. Igorota, or Ms. Iggy, finally made it to Cambodia! Her arrival in Phnom Penh was delayed because of the recent stand-off at the Suvarnabhumi Airport in Bangkok, and I was glad it didn’t take too long for the stand-off to be over and for the flights to resume. Now that she’s here, I hope she won’t mind (and that she’ll get used to, in no time, to) the heat, humidity, and the gazillion of bugs she will encounter here after being in the US state of New Jersey for quite a while. 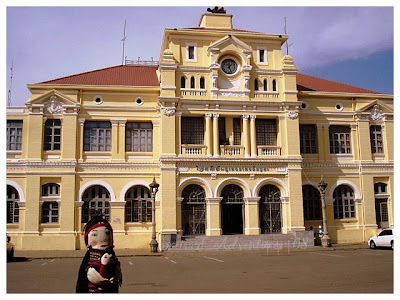 Above is the General Post Office in Phnom Penh where we picked up Ms. Iggy. Standing proudly in what was once Phnom Penh’s French Quarter, the Post Office is one of the few preserved colonial French buildings in the capital and a reminder of what the French has left in the country. There were several other French-style buildings all over Phnom Penh but most were destroyed by the Khmer Rouge, or torn down to make way for new apartment buildings, or worse, left to rot. Taking a stroll with Ms. Iggy in the French Quarter in the coming days will definitely be in our itinerary.