It’s been a long while since I posted my last Photo Hunt entry. I allowed myself to be carried away by procrastination and sheer laziness so I distanced away from blogging for some time. Now that I have finally gotten the blogging groove back, I’m slowly creeping into the blogosphere and starting to get active again in the photo-memes that I’ve joined before. So this week, I’m coming back to Photo Hunt. I hope old friends find me here again, if not, hopefully new ones will come.
The theme for this week is vertical, and having taken very little pictures the past few months, I decided to hunt from my old photos (taken on my first (2003) and second (2009) trips to Laos. Not so old, mind you… here it is: 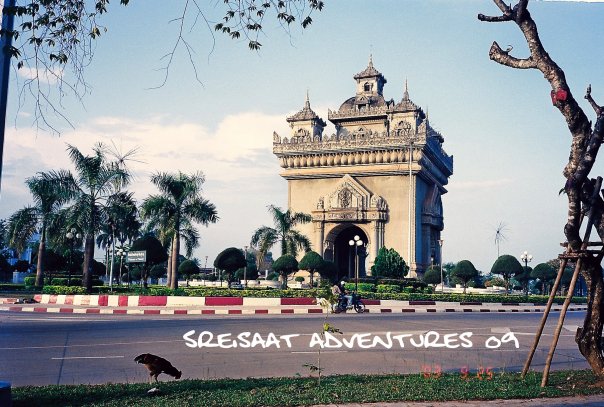 This picture shows the Patuxai Monument in Vientiane, Laos (also known as the Gate of Triumph or Victory Gate), arguably the most photographed landmark in the city. The monument was built in honor of those who died fighting in the war against the French. 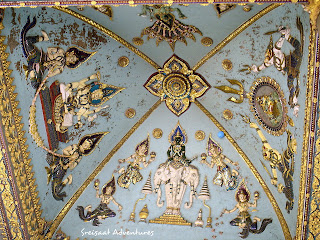 Patuxai is said to be modeled after the Arc de Triomphe in France, thus earning the title the Asian version of the Arc. However, the similarity ends only there as the Patuxai Monument, just like the temples and monuments in neighboring Thailand and Cambodia, is never without its bling-blings. Take a look at the ceiling, for example…

On top of the Patuxai monument (that is, if you are fit enough to climb several flights of stairs to reach the top!) a panoramic view of the city of Vientiane awaits you.  Great for taking pictures.

Just a bit of trivia here to explain why I chose this picture for this week’s vertical theme. 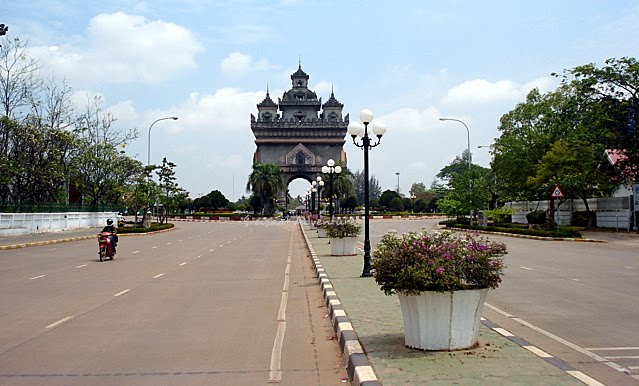 A friend of mine who worked in Vientiane for several years told me that the Patuxai monument was nicknamed as the vertical airport of Laos. Story goes that in the 1960s, the US government gave money to Laos to build a new city airport. However, the Laotian government then, for some reason, used the money to build a monument instead. And so, the Patuxai monument was referred by some as the vertical airport, even up to this day.