I was organising my stuff at home over the holidays and was surprised to find a lot of photos that have accumulated in my collection. Yes, they did bring back a lot of memories of my travels (mostly work-related) when I was still single. I decided to post them one by one. Having said that, this is my first entry for the weekly Signs, signs meme. 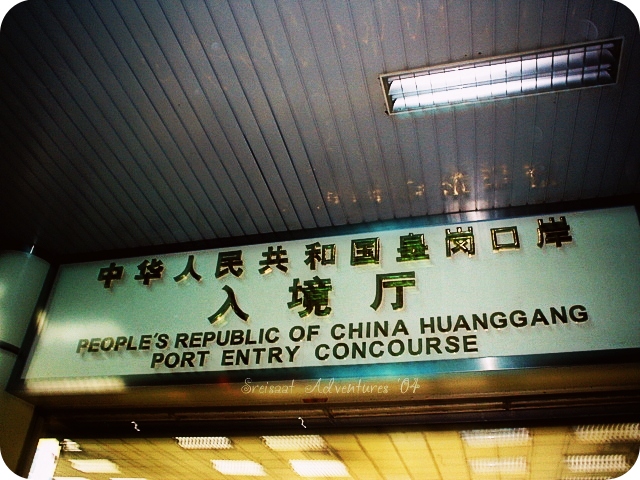 Taken in November, 2004 on my first trip to China via Hongkong for an international conference on environment in Shenzhen. At that time, applying for a Chinese visa was not as difficult as it is (for Filipinos) today. Armed with an invitation letter from the Chinese NGO and other required documents, I received my visa at the Chinese Embassy here in Phnom Penh in just three days. No hassle.

My airfare and accommodation were sponsored by my host, the Chinese NGO, and I could’ve chosen a better travel route. However, being the adventurous me, I chose one that was not usually taken by most foreign travellers – a land trip to China. From Phnom Penh, I flew to Hongkong and rode a bus that took me to the border. Arriving late at night and fearing the border closing at midnight, I was surprised to see that there was a sea of people and  (public and private) vehicles there, coming in and out of the border. It was chaotic and noisy, always moving and in a feverish hurry, something I didn’t expect considering it was already close to midnight. I found out that the border crossing, located between Lok Ma Chau in Hongkong and Shenzhen, Guangdong, operates on a 24-hour basis daily.

Going through the Hongkong and then the Chinese border controls was a breeze although I have to admit I was nervous as the border officials, especially on the Chinese side, didn’t smile and were looking rather stern. Some English are spoken there and there are signages in English but on the HK side. I wonder, after nearly a decade after, what changes have occurred there?