It really pays to have your camera with you at all times. You never know what or who you’re going to bump into.

Take for example this photo below.

I was on my way to the mall to check out a u22 recommended by a friend for a small recording project I was doing when I decided to stop by the Post Office to check my mailbox. On my way out, I spotted a moving sign from afar and before I knew it, I realised it’s “ho” wandering in the streets, probably looking for “hi” 🙂

This was actually our second choice as our favourite restaurant was closed for the holidays.

Holy Crab is one of the newest  restaurants at Psah Kdam (Crab Market) in Kep. Food was okay, more expensive than other restaurants I went to, but nothing memorable. However, the view of the sunset is marvelous — holy crab!

As an aside, the locals pronounce this as “holy crap’ as the “b” at the end of a word is pronounced as “p”.

The other day I mentioned about getting stranded along Mao Tse Tung Boulevard near Chenla Theater.

Well, a flyover bridge or a sky-bridge is currently under construction in my neck of the woods. Work began last year and it’s expected to be completed in December this year. This flyover, the fourth in the country, is being built to help ease traffic congestion along the Russian Federation, Kampuchea Krom and Mao Tse Tung (Tuol Kork lights) areas.

I live in Tuol Kork and it is already a nightmare along the Tuol Kork intersection during the peak-hours and the recent construction activities and barriers have worsened the situation. Once I got stuck in this area for two hours, hungry and feeling dizzy as I was unfortunately engulfed in a mixture of fume, dust and BOs. Next time, I’ll keep a bottle of deodorant or pinaud after shave to give to the offender in case I’d get stranded again. Just kidding.

I’m trying to get back into the blogging groove again so I’m digging up old photos and reminiscing the experiences that I may be inspired to write. So please indulge me for this week’s Signs meme.

Many years ago I was invited by a Japanese NGO to visit their country. After my official obligations were done, I stayed for three more days to get acquainted with Tokyo.

In my previous post, I mentioned about sightseeing and shopping at Demboin-dori, a shopping area in Asakusa. Having been amazed at the sights before me as I strolled along, and coupled with my faulty sense of direction, I got lost and ended up in the rokku (the sixth district) entertainment area, which was really a welcome eventuality.

Asakusa’s rokku, in its heydays, was  one of Tokyo’s prime entertainment districts before the war.  And even prior to that, between 1600s-1800s, it was said to be a known as a Yoshiwara, or the pleasure district. Sadly, it didn’t regain its popularity after the war ended.

At present, the rokku features attractions such as pachinko parlours, rakugo theatres (similar to a one-man stand-up comedy show), cinemas, and street performances.

Walking around the rokku, I could feel the post-war atmosphere. Actually, the whole Asakusa feels like old-world Japan. The advertising banners and signs for shops and shows are still traditional and some were noticeably garish.

The street cleaner had just finished his duties when I took this photo. The two “shelves” contained his cleaning brushes and is held together by a wooden stick.  He carried them on his shoulder as he went on to his next cleaning spot.  The rokku is a busy place but since I went there in the morning, the entertainment strip was still empty.

Did you see my dog?

This was months ago and my dog, Red, was just over two months old.
I was looking for him as I realised it had been quiet so suddenly in the veranda where I let him play. I called him; no Red. I kept on calling him. Over and over. Till I found him here. Called him again but he just wouldn’t budge. I guess someone didn’t want me to find him. Oh well.

This was a sign I made when we had guests from WarmShowers. In June, we hosted two  – a couple from England, and a solo cyclist from Australia. It was really nice to meet them and my husband, who was also a touring cyclist before, and I loved listening to their adventures in different parts of the world. We’ve been on-and-off hosts since 2006 and, so far,  we had hosted couples and solo cyclists from Canada, Spain, and the USA.

N.B. Please excuse the other sign that I deliberately pixelized. It showed our house and street numbers 🙂

As you might have noticed, it has been more than three months since I last posted. I’ve also not been reading blogs – just because I feel so meh. You can also say that I’m trying to find out – like an experiment of sorts – what it is like to be (almost) blog-free. Something like that.

I actually found out that I missed blogging. And reading other bloggers’ posts. So now that I basically have some free time, I can actually return to blogging *crossingmyfingers* and be transported again to other virtual worlds.

So let me come back with a recent anecdote involving my soon-to-be-six-years-old niece, Chappy.

Two weeks ago, Chappy sent me this cute present – a bracelet made up of tiny rubber bands that she made herself.  I appreciate her interest in handmade stuff and sent a message to her through my sister’s FB to thank her for the lovely rubber band bracelet. Chappy promptly corrected me – this is called a rainbow loom band bracelet, not a rubber band bracelet. I feel so old. These loom bands looked the same as the rubber bands I played with in the 80s. I find nothing fancy with these loom bands but it’s probably just the old me. Apparently, this is the hottest toy in the planet these days!

My sister told me she is so seriously into it that she asked her dad to buy her more loom band kits. She spends a lot of time making bracelets that she told her dad she is starting her “bizniz”. And one morning, everyone at home were surprised to see these signs she made herself and asked Grandpa, my dad, to post on our wall. I think these handmade signs deserve a post for this week’s Signs, signs meme 😛 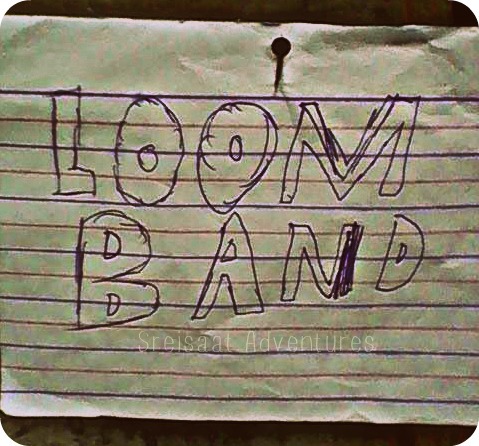 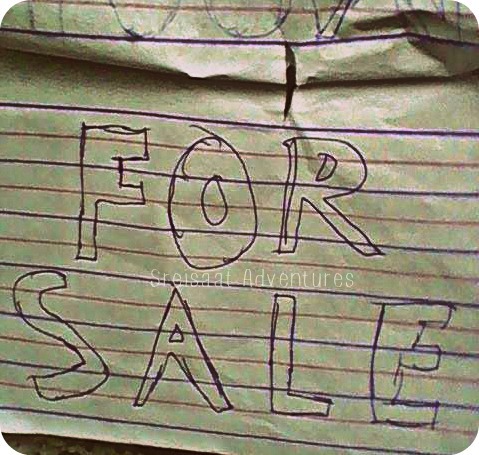 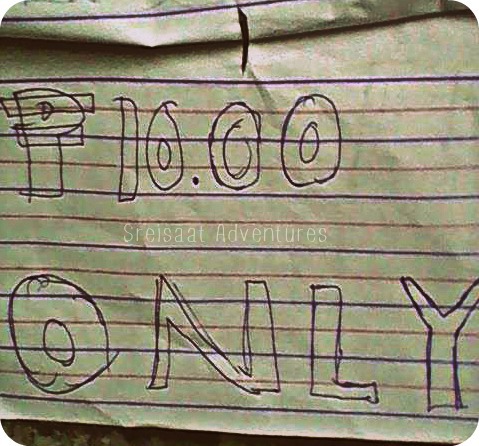 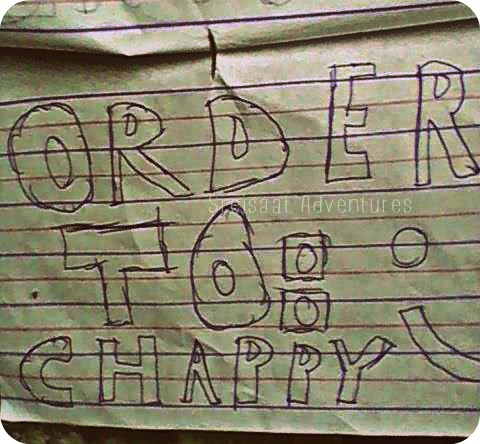 I think these loom bands are great for children for these not  only allow them to be creative but also give them something fun and worthwhile to do (making things) for hours while mums or dads are busy over something. In the Philippines where it is now the rainy season, the loom bands will keep them busy.

Here’s another post, recalling some moments associated with the signs that I took a photo of during my Laos trip.

After crossing the Laos border and finishing immigration formalities at noontime, we were picked up by a van along with many other backpackers. The van traversed a smooth highway that didn’t seem to end and with hardly a traffic at that time of the day. The view was pretty much the same as the Cambodian countryside and the weather equally as hot as a sunny day in Cambodia.

An hour or so later, after passing through several villages and Wat Phu signs, we were deposited at a pier (the name escapes me now). A lot of those who were with us in the van were going to Don Det, a small island sitting in the middle of the Laos side of the Mekong River, while my husband and I had to wait for another van that would take us to Pakse.

Don Det, I found out, is one of the bigger islands of Si Phan Don (meaning 4,000 islands) measuring about four kilometers long and is a backpacker’s haven.

After so many years, I found the SD card that contained most of my travel pictures. Happy head now that I’m reunited with my Laos pictures, some five years later!

This photo below was taken in one of the road trips my husband and I did some years ago. Of course, my travelling doll, Khmer Iggy, was with me during that trip. Khmer Iggy finds the buses in Laos delightfully colourful, except for a few that are -ahem- gaudily decorated. You can find more of Khmer Iggy and her other sisters’ travels around the world here – Postcards from Miss Igorota.

The sign on the side of the bus says “Vientiane, Pakse”.
Paksé is a city in Champasak district of Laos and is the halfway-point to Vientiane, the capital, when entering Laos via one of the border crossing in Cambodia’s Stung Treng province. It is also one of the most-visited cities in Laos due to its popular attractions of Wat Phu (an ancient Khmer temple ruins) and Si Phan Don (popularly known as the 4,000islands, much similar to the Philippines’ Hundred Islands).

In other news, public buses begin test run yesterday in an effort by the government to ease traffic jams in Phnom Penh.